I recently visited my old stomping grounds: Miami and South Beach. A noted observation this trip was how strengthened my South American and ancestral connections were – particularly with Peru. Not surprising given my spiritual past-life connection that occurred with the Peruvians and the healing
work we did together in the dessert last year.

I have lived in Miami on and off since 1987 – and with my recent Peruvian ties, it is imperative that I make a special trip to Peru one day and visit Lake Titicaca and the Island of the Sun - as much connectivity continued to be shown to me on this trip. On my last day in town, I walked along the beach in Sunnyisles – where my great grandparents Louis and Lily lived in the 50s at the Thunderbird hotel. The statue of the little girl playing chess with her grandfather outside the hotel (SEE
PIC) was still propped up on the steps -a constant reminder of my grandfatherGeorge –called Poppies who lived close by in Sunrise and the five years that were both together in South Florida. Though he passed away in the late 90s, I have written several blogs about him and I still communicate with him in spirit. My grandfather was always a clever jokester –whether it was making
dinner reservations under King George III or going with me to the Sony Ericsson Tennis tournaments on Key Biscayne (formerly the Liptons) and cheering for the under-dog – we had a great time together. He was always so much joy to be around and such a caring loving person. It's funny to think about his fun little nicknames for people – for example.. he called our dog Francesca "Fresca" and Kirby was called "Fluffy." He also had short acyronms and nicknames for people too, calling my sister Pam and her husband Ari - “A and P” like the popular Michigan grocery store chain at the time.


So when I looked across the street from the Thunderbird Hotel and saw the RK village – it reminded me of my brother Randall and sister–in-law Karen and the healing work we did in the dessert a year and a half ago that clearly showed up in the land.


You see, RK Village – as in “Randy and Karen” Village caught my eye 15 months earlier when a little old couple pulled in front of me with the license plate “R and K” in the same exact spot bringing my attention to the little RK strip mall. Now, here I was standing in the same spot, 15 months later and things had changed. The land had multiplied to several RK Village strip malls with the same R and K Village logo – but theadditional strip malls were now an entire block long with a big protective
white circle around each logo and a little basketball hoop. In addition, Peruvian stores/restaurants had opened too. Randy and Karen – like the land of RK Village (with the help of me and the Peruvians) had grown, strengthened and multiplied. During my stay, my friends and I dined one night at the Peruvian restaurant INKA that opened in Sunrise/SunnyIsles (and also on Brickell) where
I got to sample my first Peruvian pisco – a white grape brandy with lychee nuts and learned that the symbol of the “B” on their INKA logo – represented healing and fertility (growth) in Peru in every sense of the word – so it was a nice validation (a sign) that our healing work together with the Peruvian healers in the dessert had worked strongly to strengthen and fortify my family.


Given my ancestral heritage in Miami, too many wonderful signs to count occurred during this trip, but on my last day, I had the pleasure of meeting a spiritual woman from Brasil named Rosita and then another one - a woman from Cusco also named Rosie (both like my grandmother Rose and both wonderful healers) It was Rosie who sold me two beautiful hand carved soapstone wolves from Lima, Peru – one a grey wolf with green eyes (like me) and a “pig” wolf with light
brown eyes (like Sig) looking upward to the sky - ascending and special white buffalo teeth. More signs of our own healing and connection to Peru, Lakota and other South American lifetimes.


It is amazing to be able to hear and tap into the beauty of life and the wonderful caring ways of Peru, Brasil and other indigenous tribes from past and present lifetimes all in one central location. While there are many special places in this world that move me and that I connect to deeply, Miami has always held a special placein my heart. It is the one special place that I can feel all these different
past life cultures around me at once – and will therefore always feel like
home. 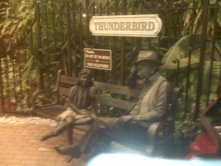