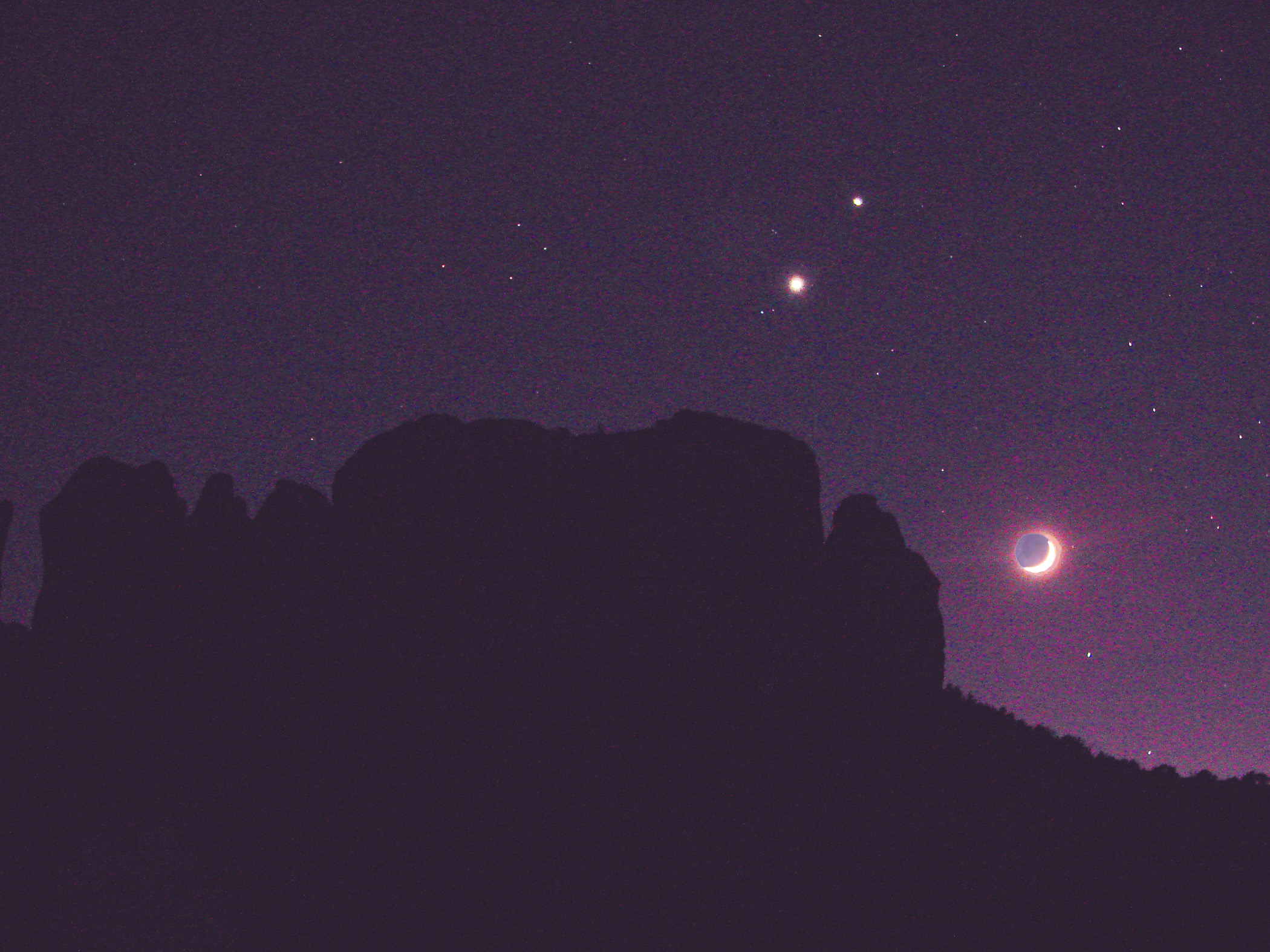 Jupiter, Venus and the Moon over Cathedral Rock, Sedona, Arizona ~ Photo and Poem by Jade Wah'oo Grigori 11/30/08 Somnambulant Dreams Somnambulant Dreams From Darkness arise unbidden. Sirona bathes memories of their anguish, Her serpents bring knowledge once hidden. The Truth of Una Stirs beauty from the heart of each Who holds firm the trust that love will not languish, When held in union’s sacred reach. Jupiter’s fortune, Embraced in holy trilogy, Shining bright from family’s hearth and clan’s home, Sings sweetly through Aphrodite. Luna’s slim crescent Cradles heaven’s candelabra, Set atop the Priestess temple’s stone pillar, To cast light in night’s penumbra. Soul to Soul to Soul The planets’ spirit songs resound, Awakening awareness into action That each our Will be found. =============================== This astounding view of Jupiter (upper right), Venus (lower left) and the crescent Moon I was able to photograph as they set over Cathedral Rock here in Sedona on November 30th. In addition, unseen, were two asteroids. Asteroid Sirona was conjunct the Moon. Sirona is the European goddess of healing springs. As the moon, symbolically, carries the memories of the past, the conjunction of the two enables Sirona to wash away the tears, fears, saddnesses and sorrows of the past. The Asteroid Una was conjunct Venus. Una is a central figure from the allegorical poem The Faerie Queene by Edmund Spenser. She embodies Truth above all carnal desires. Venus/Aphrodite, is, classically, the archetype of love, pleasure and sensate experience. The Truth of Una infuses Aphrodite with the sacred. The Priestess temple referred to is the astrological sign of Virgo, where Saturn resides in this moment. Saturn represents structure and form, rock solid and firm, i.e. the pillar that supports the crescent and candelabra of the Moon, Jupiter, Venus, Sirona and Una, as these are trine (approximately 60 degrees of arc) to Saturn. The celestial bodies of this configuration reside in the astrological sign of Capricorn, which itself resonates with the qualities of Saturn. And these, being in the eighth house (another astrological designation of positional quality) that carries the imprint of Scorpio, there is the backdrop resonance of depth of feeling and Will.