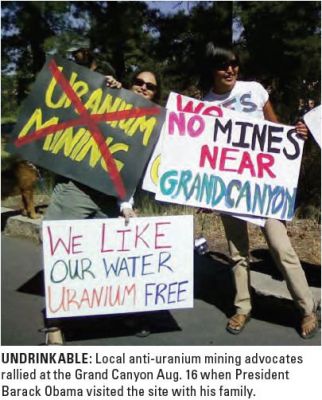 Harm to Native Peoples from Uranium Mining (Sierra Club Environmental Group)
http://arizona.sierraclub.org/conservation/forest_managment/uranium...
"… uranium contamination that has leeched into the sole-source of drinking water... A plume of uranium contamination… is now less than half a mile from the villages. This plume is now within 2,000 yards of wells and spring-fed drinking water for Upper/Lower Moenkopi Hopi Villages" In 2009 the Hopi Tribal Council voted & passed an "Environmental Groups’ Ban" Bill. Today in 2012 this Bill still legally prohibits and blocks Environmentalist such as the Sierra Club and NRDC from stepping foot at Hopi and helping Save Hopi Water.

3 Years of NO Environmental Monitoring of Hopi Water

HOPI NATION TO SUE THE U.S. GOVERNMENT OVER ENVIRONMENTAL CHARGES by Sarah Irani
http://ecosalon.com/hopi-nation-to-sue-the-us-government-over-envir...
Imagine your village’s water supply was about to be contaminated by nuclear waste from a nearby dump and the federal government simply offered to put a fence around it. If you were the Hopi Nation, you’d sue...

The Fight Over the Water Beneath Black Mesa by Kathy Helms
http://www.ens-newswire.com/ens/apr2006/2006-04-17-06.html
Should the tribes be successful, this would bring to the tribes $600 million..."Then there is another lawsuit, the RICO case, which would bring in three times that amount.

Background of the Little Colorado River litigation CIV No. 6417
http://arizonaenergy.org/WaterEnergy/Little%20Colorado%20River%20li...

Geopolitics of the Navajo-Hopi 'Land Dispute' by John Redhouse CIV No. 6417
http://www.azwater.gov/Adjudications/documents/HopiContestedCaseDis...

Hopi Water Contamination and Dropping Level links:
The Fight Over the Water Beneath Black Mesa
http://www.ens-newswire.com/ens/apr2006/2006-04-17-06.html