Export to Outlook or iCal (.ics)

"This is a Special Engagement with world-renowned geologist Robert M. Schoch, Ph.D. of Boston University and will be another intimate evening at Sedona Creative Life Center

Humanity's Forgotten Civilization: Evidence for Late Ice Age Civilization and the Solar Event that Destroyed It 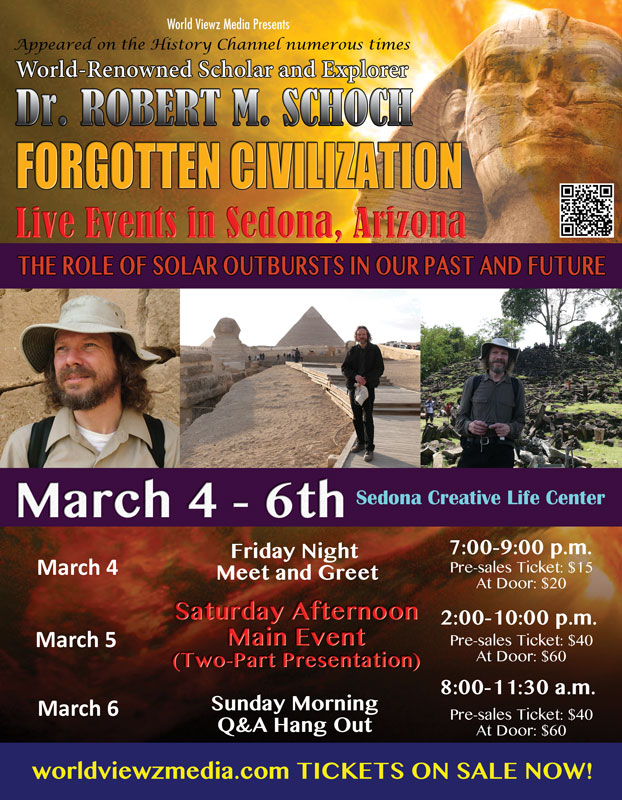 Humanity's Forgotten Civilization: Evidence for Late Ice Age Civilization and the Solar Event that Destroyed It

For a quarter century Dr. Robert Schoch has been
exploring the enduring mysteries of extremely ancient
civilizations. During this event he will first review his
groundbreaking work recasting the date of the Great
Sphinx, supported by his recent studies of the 12,000-
year-old site of Göbekli Tepe in Turkey, his latest
research at Gunung Padang in Indonesia, and his
reassessment of the indigenous culture of Easter Island –
all of which confirm that true civilization dates back to
the end of the last ice age. But the advanced civilizations
of circa 10,000 BCE did not last – in fact, they all but
totally disappeared in a flash. Why? In the second
session of the event, Dr. Schoch will explain his reinterpretation of the mysterious rongorongo texts of Easter Island, connecting the message of the glyphs to cutting-edge research in plasma physics, combined with a plethora of geological data (including detailed analyses of ice cores and sediments cores), which elucidate the cataclysms that occurred. Solar outbursts and plasma discharges brought about the rapid end of the last ice age and the demise of the early civilizations of that remote period. Pockets of survivors escaped by literally going underground, as attested by the caves and subterranean cities in the Cappadocia region of Anatolia and elsewhere. Humanity was thrown into a solar-induced dark age (SIDA) which lasted thousands of years before the re-emergence of civilization circa 4,000 to 3,000 BCE. Plato’s legend of Atlantis and many other ancient myths are confirmed. There have been, and will continue to be, cycles of civilization driven by natural events beyond our control. The implications for our modern society are profound.